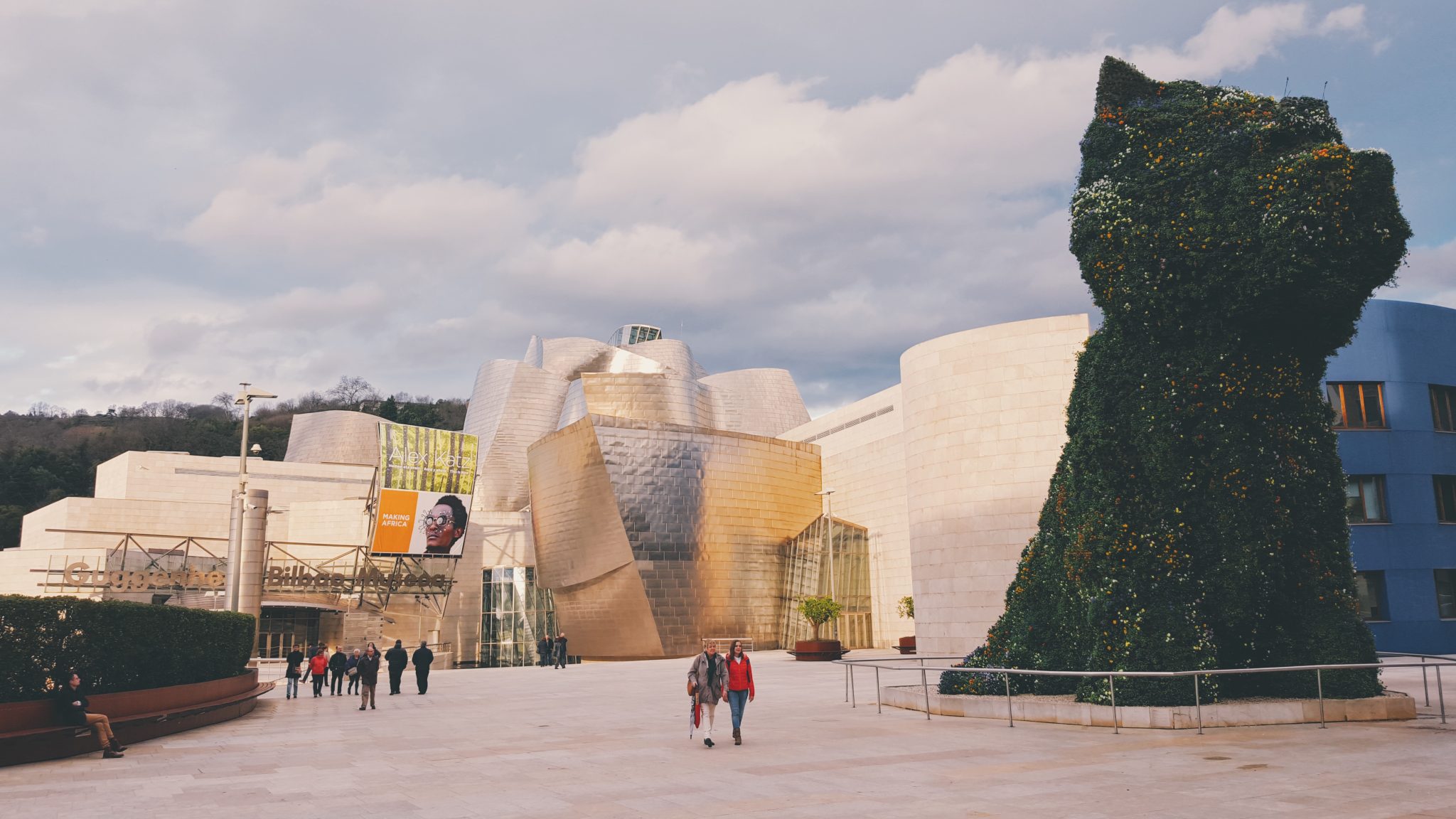 · The Miracle in Bilbao ·

I haven’t posted a 1 Year Ago in a few days.

It’s not because I’ve fallen off the wagon. It’s because we were hermits with zero tourism game. I had no notes to rely on, a couple receipts. Not a single photo was snapped on January 8, 2016. It’s doubtful a shower was involved. Personal hygiene takes a backseat when torpor comes to town.

We were hunkered down, our moseying limited to a trip to Starbucks [bless you 20 ounce Venti goddess for Jose and Carly] conveniently located on Gran Vía, half-way to the Marks & Spencer grocery department located on floor four. Imagine a grocery store atop Macy’s in Herald Square, your bags stuffed with pasta boxes and romaine, bottles of seltzer and dijon mustard, as you descend escalator after escalator after escalator. That was food shopping in Bilbao.

There’s a palpable tug of obligation when on an epic trip like The Great Leaving. Two days squandered is all that’s tolerable before Top Ten Things To Do In Bilbao gets Googled and military-like commitment returns [Pick up the pace Barclay! We must take this museum before dusk!]. My iPhone health app logged a whopping 118 steps on January 8 [see, I was not exaggerating, we were utter sloths]. Back up to 5.8 miles [that’s 11,671 steps kids] on January 9.

Walkby under the La Salve

The weather was chilly and overcast as we walked to the Guggenheim, straight on toward the Nervión River and hang a left. Once we cross under La Salve Bridge with its great red gate, the towering Louis Bourgeois sculpture Maman elicits an audible gasp. The spider stands 30 feet tall, its wobbly, spindly legs suggest she might spill her egg sack at any minute. It’s terrifying and stunning in its beauty, the cold black form against Gehry’s shiny titanium tiles of the sprawling building behind it in stark contrast. [Wo]man vs. Nature.

Once inside, I could hardly tear myself away from Richard Serra’s The Matter of Time. It moved me, profoundly. You’re completely encased in towering steel forms, 14 feet tall and up to two inches thick, but it feels intimate, organic even. Here’s what The Guardian‘s art critic had to say about it back in 2005:

Once you are in the enormous Guggenheim gallery which these sculptures fill, once you are absorbed in their space and pacing out their convolutions, you feel suddenly free – far from the dead zone of mass-media quotation, released from all that vulgar, tedious postmodernist litter and twitter, from the creepy posturings, tired bad-boy claptrap and squalid sanctimony that characterise PoMo and BritArt.

The initial view from the balcony above the Arcelor gallery

These structures are, as the New York Times opined, catalysts for memory. Its sinewy curves are not a maze but an envelope, often times closing in on you, bringing intimacy not claustrophobia. Like life, there is only one way out and that is through.

I sat for nearly an hour watching Charlie Rose interview Serra [watch it yourself here]. I studied the model. I fell in love.

Yes, there was also hanging on the wall kind of art.

Man from Naples by Jean-Michel Basquiat [1982]

I’ve included a Basquiat and one piece from a fascinating collection of sixteen large paintings by George Baselitz entitled Mrs. Lenin and the Nightingale [2008]. They repeat the same compositional structure: ‘two upside-down male figures sitting next to each other, their penises exposed and their hands resting solemnly on their thighs.’ They are meant to be Lenin and Stalin. The series alternates between rather disturbingly dark and menacing figures and then a playful levity of the two painted in bright colors and whimsical form.

And then there was the Jeff Koons PUPPY! Yes, I thought it was a cat. And, as you can quite easily see, it charmed the darn socks right off this intrepid Wayfinder.